Photo-Cover. The cover lists the actors portrayed as Robert Clarke and Mala Powers from RKO Pictures. The photo is probably from Outrage (1950) in which both actors appeared. 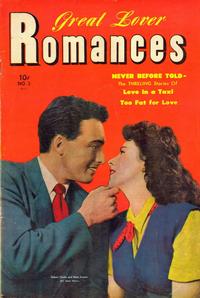 Genre
romance
Characters
Eddy; Alice; Mason J. Wentworth
Synopsis
Eddy, taxi driver, makes a point of picking up Alice at the same time, the same place every Friday. Alice falls for Eddy until she realizes he will never be rich. Instead, she goes out with her boss, Mr. Wentworth. One night on their way home, Mr. Wentworth is too forward and Alice is rescued by the taxi driver, who is no other than Eddy!
Reprints

Too Fat for Love! (Table of Contents: 2)

Genre
romance
Characters
Dorothy Drake; Dr. Anthony King; Richard Powers; Cynthia Ranson; Mr. Drake; Mrs. Drake
Synopsis
Dorothy is a popular film star specialising in comedy roles because she’s overweight. She believes director Richard dated her out of pity. Dr. King thinks her “deep need for affection” and “fear of rejection” are the “cause of her excessive over-eating”--she’s the product of a broken home and her divorced parents each spoiled her. Dr. King puts Dorothy on a diet and exercise regimen. Now thin, she begins a new career in glamour roles and learns Richard really loves her. “I’m quite sure that the solving of your emotional problems will enable you to lead a happy, normal life!” Dr. King says.
Reprints

This features a message from Glenn Ford with his picture about giving support to the Community Chest.

Powerhouse of Deceit! (Table of Contents: 5)

Genre
romance; sports
Characters
Roy; Midge; Mr. Harris; Mug Howard; Warner
Synopsis
Reporter Midge is attracted to boxer Mug, although fellow reporter Roy warns her that he’s a crooked fighter. She helps build Mug up for a big fight: he throws the fight and admits to Midge “You were conned! We used you!” Roy and Midge reconcile.
Reprints

Mug's manager is referred to as both "Walter" and "Warner."

This is a Q&A section with John Wayne. Art credits from Gary Watson, April 2009.

Genre
humor
Characters
Peggy Dean; Pat; Mike
Synopsis
Aspiring actresses Pat and Peggy are hired to stage a fight on the street in front of a bank. When the bank is robbed, they're arrested as accomplices. Confronted by the crooks, Peggy and Pat assault the men and force them to confess. However, the two women then learn that this was all a trick by the filmmakers to shoot another scene.
Reprints

This provides tips for Good Health for Teen Agers such as # 3) Two hours for chores and jobs at home.