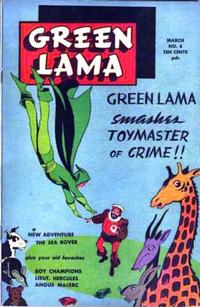 Toymaster of Crime! (Table of Contents: 1)

The last panel of the story has the Green Lama giving a code clue that only members of the Green Lama Club can decipher. Artist revision from Jerry Robinson ? to Mac Raboy, plus writer and letterer credits added by Craig Delich 2008-12-27.

The last 1/3 of this page is an illustrated advertisement for the Green Lama Club, featuring image of Angus McErc (art by George Roussos). Art and lettering credits confirmed by Craig Delich on 2008-12-27.

The Sands of Time! (Table of Contents: 3)

Genre
humor
Characters
Angus McErc [aka Mac Erc]; Phineas Fothergill; Father Time; Harriet
Synopsis
Angus is attending the bicentennial conclave of pixies and relates a story of a young man whose girl would marry him IF he could guarantee that she would never get less beautiful.
Reprints

Genre
adventure
Characters
The Boy Champions [Tuffy; Mickey; Wellington Smith]; Mr. Jaspar; Jane Jaspar; un-named gang (villains)
Synopsis
The boys are hired to catch the ghosts that are haunting the Jaspar Mansion so that Jane can open a nursery for children.
Reprints

The last 1/3 of the last page is an illustrated advertisement, with covers, for Green Lama #5, Golden Lad #1 and Atoman #1.

First Line of Dialogue or Text
Organized demands for an eight...
Genre
non-fiction
Synopsis
Factual illustrated information is provided in regards to: the fight for the 8-hour workday, the first labor-management contract, an agreement on wage rates, electric eels reforming cats, and the first American to use an umbrella being stoned.
Reprints

Genre
adventure
Characters
Jerry Delaney; Mabel Delaney
Synopsis
Jerry Delaney has a scheme to turn forty cents into some real easy money... that is, until an obliging Policeman innocently messes up the deal.
Reprints

First Line of Dialogue or Text
I'm ready, Pop! Let's go...
Genre
humor
Characters
Mike McTigg; Pop
Synopsis
Pop is a member of the Mental Wizards Association and claims his mental abilities will help with Mike's boxing career. It doesn't help in other ways, though.
Reprints