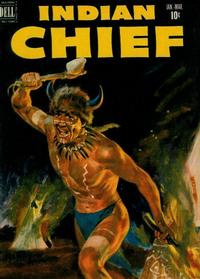 Genre
western-frontier
Characters
Kennebec
Synopsis
Kennebec (a white man) and his brother wander too far while hunting Caribou. His brother is killed by Indians and he is left for dead.

The Sacred Fire (Table of Contents: 2)

The stories in Indian Chief are among the first Giolitti made when he came to America. He did both pencils and inking on all his stories while in the USA, and was only assisted by Giovanni Ticci on pencils on backgrounds when he came back to Italy in 1960. Info from Angelo Todaro who worked with Giolitti. Art ID by Steinar Ådland January 2011. Script credit from Robin Snyder's The Comics!, taken from Paul S. Newman's personal records.

The False Face (Table of Contents: 3)

Genre
western-frontier
Characters
Fleet Fox; White Moon; Hawk Feather (all Iroquois)
Synopsis
When Huron warriors overthrow an Iroquois camp, a young boy is taken as hostage in exchange for allowing the women to live. After ten years of peace, war breaks out again. A masked warrior comes to defend the Iroquois against the Huron.
Reprints

Genre
western-frontier
Synopsis
Reproduction of painting with this commentary: "On the Southern Plains in 1860" by Frederick Remington was such a good portrayal of the old United States Cavalry in action that it now hangs in the Metropolitan Museum of Art. Their arms were an "Army Colt" and a saber.