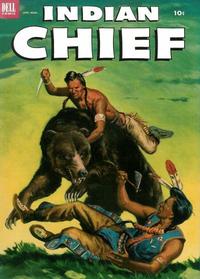 The Rock Dam (Table of Contents: 1)

Genre
western-frontier
Characters
Chief Leaping Deer; Indian Agent; Crazy Jack (trader)
Synopsis
Crazy Jack helps a band of Indians re-channel the only river on their new reservation so that they will be able to plant crops in the Spring.

Two drawings. The inking of the faces is identical to the signed stories by Jon Small in this series, and in this issue.

The Haunted Pueblo (Table of Contents: 2)

Genre
western-frontier
Characters
Cloud; Aster (both Taos tribe)
Synopsis
Several Taos Indians brave a haunted pueblo to learn that it is only haunted by Apaches.

The Trapper (Table of Contents: 3)

Genre
western-frontier
Characters
Turtle; Pale Moon; Black Bear (all Chippewa)
Synopsis
Several Sauk warriors are captured spying near the Chippewa camp. Turtle is tasked to watch over them. When they escape, his trapping skills are put to the test.

The artwork here is identical to Jon Small's signed stories in this series, Four Color #290, The Chief #2, and Indian Chief #3. The best clue is the heavy inking, and the close up faces, especially of the chiefs, with many thin inklines along the cheekbones and upper lip. Also the scenery, and movement of the figures are similar.

The Last Cavalier (Table of Contents: 4)

Genre
western-frontier
Synopsis
Reproduction of painting with this commentary: "The Last Cavalier" by Frederick Remington portrays excellently the feeling most people have about the frontiersman. He was the last of the race of gallant, mounted fighters. The artist included his foe, the Indian, among the riders in the picture.