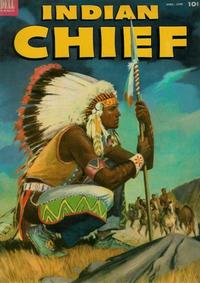 This story is printed on the inside front and back covers.
Two drawings, and faces, hairstyle, movement and inking are exactely identical to his signed work in The Chief #2

Arrows of Fire (Table of Contents: 2)

The artwork here is identical to Jon Small's signed stories in this series, Four Color #290, The Chief #2, and Indian Chief #3. The best clue is the heavy inking, and the close up faces, especially of the chiefs, with many thin inklines along the cheekbones and upper lip. Also the scenery, and movement of the figures are similar.

The Dead Men (Table of Contents: 4)

Genre
western-frontier
Synopsis
Reproduction of painting with this commentary: The sense of dread that inevitably overcame some of the bravest men in our vast western lands was the subject of Remington's "The Dead Men". These trappers, dressed in buckskins, have come across evidence of what has happened to earlier travellers.