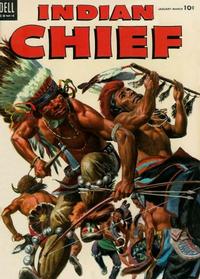 The Deadfall (Table of Contents: 1)

Genre
western-frontier
Synopsis
Caught out checking his traps, Little Coyote of the Ojibway tribe must defeat a Huron warrior who threatens his people.

This story is printed on the inside front and back covers.
The rather unmuscular figure under the tree, sketchy hands and inking makes these drawings the work of Maxon. He drew many of the "Young Hawk" stories in Lone Ranger, and some early Tarzan. Also one story in Indian Chief #6.

White Eagle and the Hostage (Table of Contents: 2)

The Copper Knife (Table of Contents: 3)

The artwork here is identical to Jon Small's signed stories in this series, Four Color #290, The Chief #2, and Indian Chief #3. The best clue is the heavy inking, and the close up faces, with many thin inklines along the cheekbones and upper lip. Also the scenery, and movement of the figures are similar.