Probably by Gollub, when looking at the face with marked nostrils, which are not far from his interior stories. 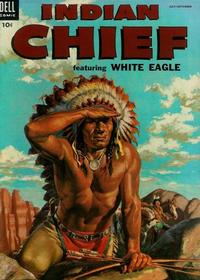 Indian Chief White Eagle and the Traitor (Table of Contents: 2)

John Daly is credited on Indian Chief by Jerry Bails' Who's Who. This artwork compares best with his signed story "Poison Allard's Last Draw" in Western Fighter #2, with the thin slanting cheekline in profile, lines down from the nostrils, and eyes that really don't look at anything. Also compares well with early DC's Aquaman stories on the faces. He changed much from his early drawing in True Comics, but his faces can be recognised, like the Indian on page 34 in True Comics #1.

Red Wing Son of the Chief (Table of Contents: 3)

Genre
western-frontier
Characters
Chief Bright Feather; Red Wing (Navaho)
Synopsis
When the Zuni attack the Navaho hogan (village), the children take up arms to defend it, led by the son of the Chief. Red Wing is taken captive, but leaves a trail for his people to follow.

Every Indian Had a Good Luck Token! (Table of Contents: 4) (Expand) /