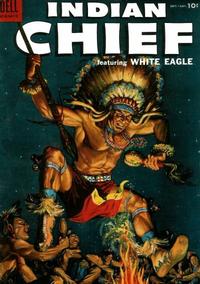 Genre
western-frontier
Synopsis
Trapping has been poor for Wandering Spirit of the Abenaki tribe. His people need meat badly. If he can just capture this moose.

Genre
western-frontier
Characters
Chief White Eagle (Sioux); Chief Gray Wolf (Winnebago)
Synopsis
Winnebagoes attack the Sioux, but they are supposed to be at peace. Gray Wolf asks for a peace powwow, but has evil plans.

Red Wing, Son of the Chief and the Raid (Table of Contents: 3)

Notes as for first story.