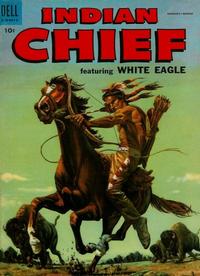 A Badge of Honor (Table of Contents: 1)

Genre
western-frontier
Synopsis
The meaning of various feather arrangements as worn by Indians.

Indian Chief White Eagle and the Hunted (Table of Contents: 2)

This artwork compares best with Daly's signed story "Poison Allard's Last Draw" in Western Fighter #2, with the thin cheekline in profile, eyes that really don't look at anything. Also similar to DC's early Aquaman stories on the faces. He changed much from his early drawing in True Comics, but his faces can be recognised, like the Indian on page 34 in True Comics #1.

The Thunder Bird (Table of Contents: 3)

Red Wing, Son of the Chief and the War Drums (Table of Contents: 4)