Dell
Printer
Designed, produced and printed in the U.S.A. by Western Printing and Lithographing Company 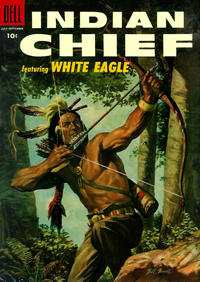 Genre
non-fiction
Synopsis
"Dell is proud to present one of its many awards ... Distinguished Achievement Award presented to Mr. George T. Delacorte, Jr."

Vision of a Warrior (Table of Contents: 2)

First Line of Dialogue or Text
Who will use it, shaman?
Genre
western-frontier
Characters
Chief White Eagle; Raven Beak; Thunder Rider; Chief War Bird (Crow)
Synopsis
Raven Beak seeks a vision. His vision has him leading half of the Sioux tribe off to create a new tribe. This makes both groups more vulnerable to the Crow.
Reprints

This artwork compares best with Daly's signed story "Poison Allard's Last Draw" in Western Fighter #2, with the thin cheekline in profile, eyes that really don't look at anything. Also similar to DC's early Aquaman stories on the faces. He changed much from his early drawing in True Comics, but his faces can be recognised, like the Indian on page 34 in True Comics #1.

Blue Crawfish and his First Deer (Table of Contents: 3)

First Line of Dialogue or Text
Blue Crawfish, a Catawba India boy, walked cautiously along the edge of the swiftly flowing, mighty river.
Genre
western-frontier
Synopsis
Blue Crawfish of the Catawba tribe hunts for food for his tribe.
Reprints

Red Wing, Son of the Chief and the Story in the Sand (Table of Contents: 4)