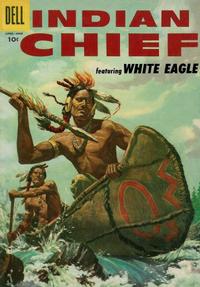 Another Award for Outstanding Service to Youth (Table of Contents: 1)

Quest of the Chinook Chief (Table of Contents: 2)

The Enemy (Table of Contents: 4)

Genre
western-frontier
Synopsis
Young Shooting Star (Catawba boy) spies a large band of warriors headed toward his village. He races to warn his people. Fortunately, they turn out to be friends, the Waxhaws.

Tom Gill had some of the text story illustrations in this series, and the even inklines are similar to his signed drawing in #15.

Red Wing Son of the Chief and the Stone War Club (Table of Contents: 5)

Some faces with pin point eyes and "hovering" movement with arms away from the body when running, are all signs of Micale. He had many stories with Roy Rogers and Wild Bill Elliott for Dell.

On inside back cover in black and white.