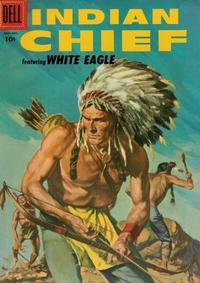 Journey to the Sun (Table of Contents: 2)

Genre
western-frontier
Characters
Chief White Eagle (Sioux); Chief Dark Wing (Creek)
Synopsis
White Eagle is tricked into attending a meeting of many Chiefs, hosted by Chief Dark Wing of the Creek. Dark Wing intends to force them to declare obedience to him.

Genre
western-frontier
Characters
Blue Wampum (Mantauk boy); Gerry King (English boy)
Synopsis
A young boy from a new English colony is injured in the woods and an Indian boy finds him and helps him to get home.

The round faces with very short eyebrows and no nostrils match some frontal faces in the Red Wing story by Daly.

Red Wing Son of the Chief and Traitor in the Camp (Table of Contents: 4)

Vacation Time Is All Too Short (Table of Contents: 6) (Expand) /