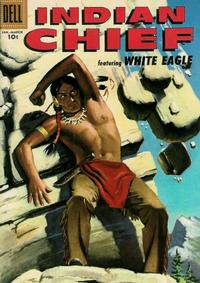 The Story of the Tribe (Table of Contents: 1)

On inside front cover in black and white.
The faces with marked line at cheekbone are by Daly.

The Sealed Cave (Table of Contents: 2)

The Eagle Feathers (Table of Contents: 4)

House ad for Sergeant Preston of the Yukon #22.

On inside back cover in black and white.

Have Mom and Dad Take You Down to See the Keen New Toys in Toyland! (Table of Contents: 7)