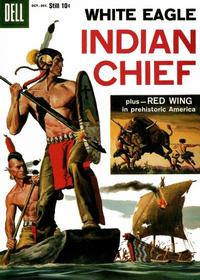 The Muskogee and Carib appear to be Aztec spin-off groups.

The Brave One (Table of Contents: 3)

Red Wing Son of the Chief: Valley of Decision (Table of Contents: 4)

Genre
western-frontier
Characters
Chief Tarr; Red Wing (of the first people); Tuma (of the Bear people)
Synopsis
The first people learn to hunt bison. The Bear people want to take over their hunting grounds.
Red Wing captured by the Bear people faint to lead them to his people. Instead he led them to the giant Bison field. At the end Tarr give the Bear people the country as the frist people go southward. After saying Tarr their people will be brothers, Tuma promises his men that next time it will be a different story.