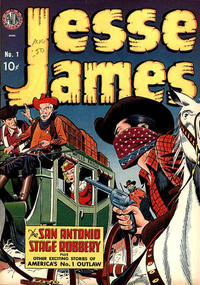 Jesse James and the Centralia Massacre (Table of Contents: 2)

Split-Second Stand In! (Table of Contents: 3)

introduction & origin of Alabam, who becomes sheriff of Broken Creek, taking over for his murdered Uncle John. The killer also kills his Aunt Hilda, making Alabam another in a long string of "orphaned" comic-book heroes who fight evil after it has struck down a loved one.

The Story Behind the Cover / text story / 2 pages (report information)

Jesse James and the Great Plains Robbery! (Table of Contents: 5)