A previous indexer credited Al Avison. However, the cover is signed by Ham Fisher. 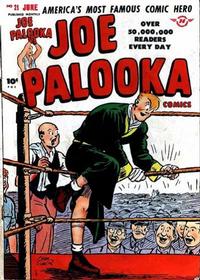 Inside front cover. Illustrated public service announcement for the Red Cross. Signed in lower right corner, but signature is not clear.

Adventure in the Hidden City (Table of Contents: 4)

First Line of Dialogue or Text
Oh, Perkins, don't be such an old fusspot.
Genre
adventure; sports
Characters
Joe Palooka; Smokey; Knobby Walsh; Angela; Perkins; Sheik Ibi-Ben-Abou
Synopsis
Joe and Smokey are in the French Foreign Legion. They get lost in the desert and are captured by soldiers and taken to the hidden city of Sheik Ibi-Ben-Abou.
Reprints
Keywords
Arabs; desert; Foreign Legion

First Line of Dialogue or Text
Wonder if I could train ya to be a husky?
Genre
humor; children
Characters
Flossie
Synopsis
Flossie teaches her dog to pull her on a cart, with predictable results.
Keywords
baker; cake; cart; dog

First Line of Dialogue or Text
Gosh, it's a cloudburst, an' how!
Genre
humor; children
Characters
Flossie; her mother
Synopsis
In a rainstorm, Flossie takes an umbrella to meet her sister at the subway.
Keywords
rain; subway; umbrella

Continued in the next issue.

Cartoon Laughs at the Ringside (Table of Contents: 13)

First Line of Dialogue or Text
O.K. This is the round. Give him everything you've got!
Genre
humor; sports
Keywords
boxing

First Line of Dialogue or Text
All is over between us!
Genre
humor
Characters
Ricky Rooney; Chickie
Synopsis
Ricky thinks he has a chance when Chickie dumps the military cadet she has been dating.

First Line of Dialogue or Text
Crashing in the Himalaya mountains, Chickie, Gooch and Maylene are...
Feature Logo
Chickie Ricks Better Known As the Flyin' Fool
Genre
adventure; aviation
Characters
Chickie Ricks [Flyin' Fool]; Gootch; Maylene; Ola Jansson
Synopsis
Chickie, Gootch, and Maylene were rescued from a crash in the Himalayan Mountains by a band of bandits, who intend to hold Maylenne and her friends hostage for a large ransom. They are locked in a storeroom, but with the help of a Swedish hideaway find a plane and attempt an escape.
Keywords
airplane; cave; Himalayas; ransom; Sweden

The Case of the Missing Gems (Table of Contents: 20)

First Line of Dialogue or Text
"Jeez, but the bulls sure got themselves a first class puzzler."
Genre
superhero
Characters
Black Cat [Linda Turner]; Tim Turner; Barry Boston; Rick Horne; Jonesey
Synopsis
Linda Turner gets a tip from an underworld hood about a jewel theft. The Black Cat then follows the tipster to the gang holding the jewels.
Keywords
jewel thief; judo

Tiny Black Cat illustration by the title is the only art.

"Courtesy of The New Yorker". Ad in comic format for buying U. S. Savings Bonds in order to fight inflation.

How to Make Your Body Bring You Fame (Table of Contents: 24) (Expand) /