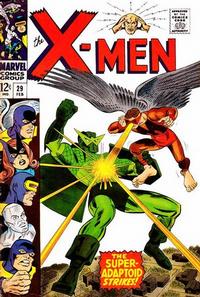 When Titans Clash! (Table of Contents: 1)

First Line of Dialogue or Text
So this is what you mutant misfits do when you're not battlin' other freaks... ya goof off ice-skatin'!
Genre
superhero
Characters
The X-Men [Professor X; Beast; Iceman; Cyclops; Marvel Girl; Angel]; Mimic; Super-Adaptoid (Villain)
Reprints