Inker's name is misspelled as Hennessey in issue credits. 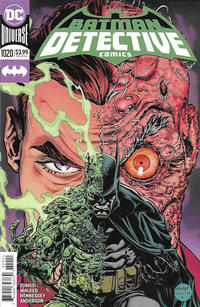 First Line of Dialogue or Text
Let me tell you something, boys. Gotham City is a werewolf. Its people, facades, and towers present themselves, one way during the day, another way at night.
Genre
superhero
Characters
Batman [Bruce Wayne]; Two-Face [Harvey Dent]; Demarco brothers (deaths); unidentified doctor (death); unidentified followers of Two-Face
Synopsis
When Two-Face returns, Batman investigates and encounters an organized group of followers of Two-Face.

Inker's name is misspelled as Hennessey in issue credits.

Shadow of the Batgirl (Table of Contents: 8) (Expand) /

First Line of Dialogue or Text
Young Justice reintroduced Gemworld and its most famous resident, Amethyst--and now the character stars in a new six-issue series from writer and artist Amy Reeder.

DC Nation interviews Amy Reeder about the new Amethyst series from DC's Wonder Comics imprint with a couple of her illustrations, plus the publisher/indicia information.