Probable arrival date based on front cover stamp of indexer's copy.
This issue has variants:

Clea Must Die! (Table of Contents) 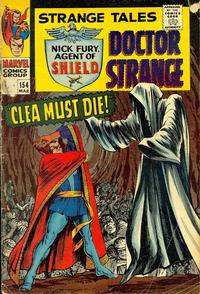 Genre
spy; superhero
Characters
Dum Dum Dugan; Nick Fury; Laura Brown; Gabe Jones; Supreme Hydra ["Agent Bronson" (alias)]; Jasper Sitwell; HYDRA; Boothroyd (Personal Effects Dept.); The Dreadnought (HYDRA Robot)
Synopsis
While the AUTOFAC computer works out the true identity of the Supreme Hydra, Fury plans to have Bronson transport Laura to SHIELD's West coast HQ. In the Personal Effects Dept. Fury is given a new weapons-laden outfit. Moments later he's attacked by The Dreadnought, a deadly 8-foot-tall HYDRA killer robot. Laura suspects Bronson may be the Supreme Hydra himself, and her suspicions are confirmed by AUTOFAC, but before she can pass on the info, Bronson overpowers her. Fury just barely manages to beat The Dreadnought, but finds Laura is missing-- and AUTOFAC names her as the Supreme Hydra!
Reprints

Part 5 of 9. Fury's "Repulsor Watch," capable of deflecting bullets, later turned up in the film LIVE AND LET DIE (1973), though in the movie, it was only used to attract metal, not deflect it. SHIELD would build their own "Dreadnought," a tunneling machine, which would turn up in STRANGE TALES #167 (April 1968). HYDRA's "Dreadnought" would turn up again in DAREDEVIL #121 (May 1975).

Clea Must Die! (Table of Contents: 4)

Genre
superhero; fantasy-supernatural
Characters
The Mindless Ones; Dr. Strange; Umar; Veritas (Embodiment of Truth Incarnate); Clea (image only)
Synopsis
Thru trickery Strange manages to escape The Mindless One. Using the Eye of Agamotto, he spies on Umar in her castle, as she plots to grind each dimension in turn under her heel. Seeking to free the prisoners in Umar's dungeon, Strange encounters Veritas, the "Embodiment of Truth Incarnate", and takes him to the castle past as swarm of flying demons. Umar is shocked and cannot bear the sight of herself as she really is (thanks to Veritas), but as Strange confronts her, she sends forth a mystic bolt of death-- toward Clea!
Reprints

Part 8 of 22; part 4 of Umar sequence. The flying demons around Umar's castle are strikingly similar to those seen in the 1968 SPIDER-MAN cartoon, "The Evil Sorcerer". Cover story.

First Line of Dialogue or Text
Dear Stan, Allow me to be the first...
Reprints