...Then There Shall Come a Stranger! (Table of Contents) 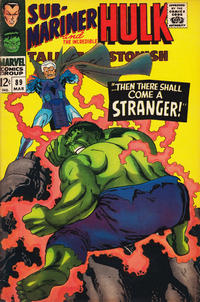 The Prince and the Power! (Table of Contents: 1)

First Line of Dialogue or Text
Never has fair Atlantis faced so great a danger!
Genre
superhero
Characters
Sub-Mariner [Namor]; Lord Vashti; Lady Dorma; Attuma (villain)
Synopsis
Attuma has sent a giant alien robot to destroy Atlantis and it takes all of the power of Namor, his subjects and his underwater animal friends to hold the creature at bay. The battle abruptly ends when the aliens show up to retrieve their missing mechanical servant.
Reprints
Keywords
octopi; robot; whale

...Then, There Shall Come a Stranger! (Table of Contents: 3)

First Line of Dialogue or Text
Dear Stan, I could start off by praising...
Characters
Sub-Mariner [Namor]; Lady Dorma
Reprints