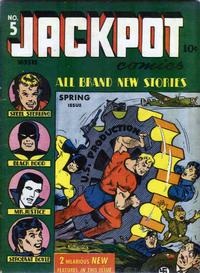 [The Lost Colony] (Table of Contents: 1)

Genre
superhero
Characters
Steel Sterling [John Sterling]; VILLAINS: Captain Scragg (intro; flashback); the Nazis
Keywords
The inking style varies over the course of the story. Some of it looks like Mort Meskin.

Zogi the Yogi (Table of Contents: 3)

The Case of the Haunted Violin (Table of Contents: 5)

Murder On Wheels (Table of Contents: 6)

Genre
humor; teen
Characters
Archie Andrews; Jughead Jones; Reggie Mantle; Mr. Weatherbee; Veronica Lodge; Scotty; Streaky Shore
Synopsis
Archie gets initiated into the Philomathian club but hurts Mr. Weatherbee in the process. As a result, Archie is banned from the class boat ride. Jughead persuades Archie to go because Mr. Weatherbee never goes on the boat rides. However, he does and Archie has to avoid him.
Reprints

Gives setting of New York tri-state area, with references to the Hudson River and Bear Mountain.
First appearance of Reggie Mantle and Mr. Weatherbee.
Reggie Mantle shown to be wealthy.

[The Lost Tribe of Genghis Khan] (Table of Contents: 9)

Per Bud Plant e-mail on 4/6/07, art was signed by Warren King. Pencil and ink credits were originally attributed to Sam Cooper.

[The Rescue of Margie Knox] (Table of Contents: 10)