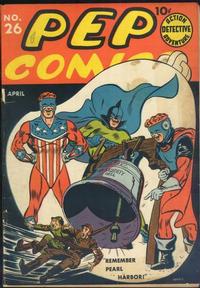 [The Case of William Wayne] (Table of Contents: 3)

[The Menacing Missionary] (Table of Contents: 4)

First Line of Dialogue or Text
In Singapore a council of war is held among the...
Characters
Sergeant Boyle; Corporal Collins; Japanese (villains); Capt. Twerp; Fuji
Synopsis
Sgt. Boyle is transferred to the Pacific theater, and enroute, he destroys a secret Japanese naval base.
Keywords
Libya; Singapore

[The Russian Mission] (Table of Contents: 7)

First Line of Dialogue or Text
Oh, one of us is from the States - another from Down Under...
Genre
aviation; war
Characters
Jolly Roger; C.T. Price; Marty Martin; Frank Root; Colonel Vodka (introduction); Nazis (villains); General Visk
Synopsis
The Sky Pirates are transferred to Russia to assist the Russian air force.

First Line of Dialogue or Text
Gosh!! Who cares about the Stamp Act when Veronica's making history right here in school.
Genre
humor; teen
Characters
Archie Andrews; Veronica Lodge (introduction); Jughead Jones; Fred Andrews; Penny Reems; Betty Cooper (cameo); Mr. Debillsbury; Tony
Synopsis
Archie meets Veronica and asks her out, not knowing that she's a rich girl with expensive tastes. He gets a job at the El Crocadearo to get money for the date, but that is where Veronica ends up wanting to go. Since Archie wore his work uniform for the date, he has to juggle working and dating Veronica.
Reprints

[The Bandit King of San Paulo] (Table of Contents: 10)