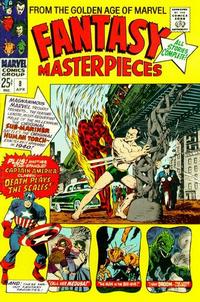 First Line of Dialogue or Text
From the glory-drenched pages of yesteryear...

The Human Torch versus the Sub-Mariner (Table of Contents: 2)

Genre
superhero
Characters
Human Torch [Jim Hammond]; Sub-Mariner [Prince Namor]; Betty Dean; un-named Police Chief; Police Chemist Frasier
Synopsis
Embittered when the Police Commissioner calls Torch afraid for not bringing in the Sub-Mariner as he promised, the Torch and Betty track down Namor and a battle royal begins that ends with the Fiery Fury being captured by Namor in an airless glass tube.
Reprints

I Saw Droom the Living Lizard! (Table of Contents: 3)

Job Number
T-634
Genre
horror-suspense
Characters
Droom (introduction, origin); Dr. Henry Gordon; Arnold
Synopsis
A scientist invents a growth serum intended to solve world hunger by enlarging vegetables. A tiny exotic lizard is accidentally soaked by the liquid and grows into a giant lizard that rampages across the country. They blast it into outer space and it drifts through space frozen, eventually landing on Earth to become the first dinosaur.
Reprints
Keywords
monsters

Narrated in the first person. A revised version of Droom appears next in Fantastic Four / Iron Man: Big in Japan (Marvel, 2005 series) #1 (December 2005).

A Profound Potpourri of Perplexing Pronouncements and Preposterous Philosophy, All Portending Practically Nothing! (Table of Contents: 4) (Expand) /

The Man in the Beehive! (Table of Contents: 5)

Job Number
V-765
Genre
science fiction
Characters
Lucius Farnsworth; Eric
Synopsis
An eccentric beekeeper reveals to a thief that he is a mutant with special powers. He shrinks the thief and frightens him with the attacks of the bees that are now larger than he is, but leaves him wondering if any of it was real.
Reprints

Genre
science fiction
Characters
John
Synopsis
The gorgons of myth were aliens and send an agent to modern Earth preceding an invasion. She cannot turn the first men she encounters to stone, but since she doesn't know that they're blind the invasion is cancelled.
Reprints

Genre
superhero
Characters
Captain America [Steve Rogers]; Bucky [Bucky Barnes]; Sergeant Duffy; Senator Alvin Benson [death]; Inspector Grimes; Senator Shores; The Fiddler (introduction, death), Haver, Hobbs
Synopsis
Cap has to battle the evil intentions of a man who uses a domestic employment agency as a blind in order to get his Nazi agents into the homes of anti-Nazi Senators in order to kill them.
Reprints

The original title of this story was "Horror Plays the Scales".