Statement of Ownership average number of copies in preceding 12 months: 404,314. On-sale date from 1967 Periodicals, Copyright Office, Library of Congress.
This issue has variants:

The Menace of... Byrrah! (Table of Contents) 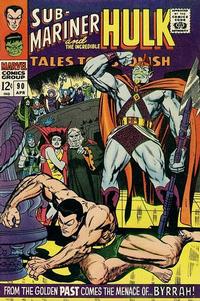 To Be Beaten by Byrrah! (Table of Contents: 1)

First Line of Dialogue or Text
For years I have lived in the Sub-Mariner's shadow--ever biding my time--!
Genre
superhero
Characters
Sub-Mariner [Namor]; Lord Vashti; Lady Dorma; Byrrah (villain)
Synopsis
Namor's cousin wins the favor of the populace of Atlantis as well as the Atlantean council by belittling the regime of the Sub-Mariner as violent and unstable. He challenges Namor to single combat for the right to rule and no one is more surprised than the avenging son when his powers desert him during the fight and Byrrah handily wins.
Reprints

Byrrah, Namor's cousin, is re-introduced from the continuity of the 1950's.

Kuramoto lettering credit also by Nick, who explains it is based upon an examination of lettering styles. Previous indexer credited Ray Holloway as using the pseudonym "Sherigail" but the name was derived from Morrie Kuramoto's wife and daughter, Gail and Sherry, as noted here: http://www.nyu-apastudies.org/new/larryhama/?p=129

The Abomination! (Table of Contents: 3)

First Line of Dialogue or Text
Hulk must smash...
Genre
superhero
Characters
Hulk [Bruce Banner]; Thunderbolt Ross; Betty Ross; Glenn Talbot; Abomination [Emil Blonsky] (villain, introduction, origin); The Stranger (cameo)
Synopsis
The Stranger leaves earth with the rampaging Hulk left behind to wreak destruction on his behalf. Turning back into his alter ego, Banner surrenders himself to Gamma base and tries to kill himself with radiation to stop the Hulk's destruction. Stopped before he can use his gamma machine, the machine is instead used by a foreign spy who is transformed into the Abomination. More powerful than even the Hulk, Abomination beats the jade giant down and kidnaps Betty as he escapes from the base.
Reprints
Keywords
gamma rays

A note within the story states that "gamma rays affect everyone they touch in a different manner!" Hence, the difference in abilities between the Hulk, the Leader, and the Abomination.

First Line of Dialogue or Text
Dear Stan, The character that I am thinking about is the Sub-Mariner.
Characters
Hulk [Bruce Banner]
Reprints