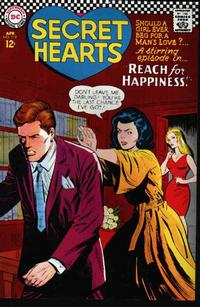 There Is No Forever! (Table of Contents: 1)

My Heart's Desire! (Table of Contents: 2)

Genre
romance
Synopsis
Connie falls in love with Phil, but he's with her friend Margot so she gives him up. Years later, they meet again - do they have another chance?
Reprints

Genre
romance
Characters
Peggy Wilder; Bob Bates; Karen Wilder Sommers; Dr. Greg Marsh; Lila Smathers; Rita Phillips; Marty Phillips
Synopsis
Bob and Peggy hope that they can be together when Bob's divorce is final. Lila questions Greg about his commitment to Rita, while Rita realizes that her father may not fit in with her new life.
Reprints

script credit suggested by the Who's Who of American Comic Books.

Love Problems Every Girl Can Understand... (Table of Contents: 6) (Expand) /

You Can Be Beautiful! / text article / 1 page (report information)