This issue is a variant of The Flash (DC, 2016 series) #19 [Carmine Di Giandomenico Cover]. There exist further variants.

Starting with this issue, the publication frequency listed in the indicia changes from "bimonthly" to "biweekly". The series has been published twice a month since issue #1.

Sins of the Father (Table of Contents) 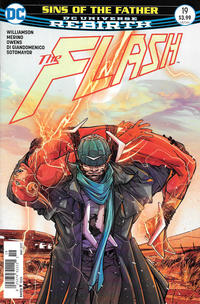 Sins of the Father Part Two (Table of Contents: 1)