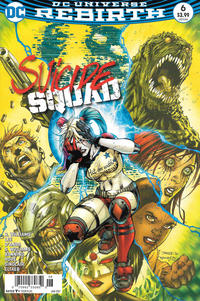 Story credits include special thanks to Philip Tan.

Captain Boomerang, who was incinerated by General Zod in issue #2, appears grossly disfigured in an unexplained vision to Hack, and saves her from undergoing an unwanted medical procedure in the prison infirmary.

Genre
superhero
Characters
Killer Croc [Waylon Jones]; Amanda Waller; Sanchez (prison guard, deceased); Fisher (prison guard, deceased); Ogletree (prison guard, deceased); Alec (young bully, flashback, death); unnamed bullies (flashback); Emma (childhood friend of Croc, death); Croc's unnamed aunt (flashback); unnamed police officers (flashback)
Synopsis
Waller reviews Croc's childhood with him. In a flashback, we learn how bullies taunted young Waylon Jones because of his skin condition, but he was befriended by a young girl named Emma. When one of the bullies goes missing, Waylon tried to help find the boy. Waylon and Emma find the boy has been killed by a crocodile, which then attacks them. Waylon tries to protect Emma, but she is killed also. The police arrive and believe that Waylon has killed the two kids, unaware that he was trying to save them.
Reprints
Keywords
Belle Reve