Burning Down the House Part One (Table of Contents)

Richard Friend credited with inks in story credits in error. 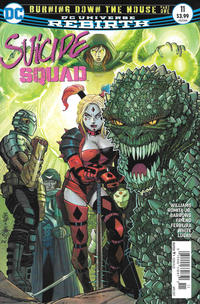 Burning Down the House Part 1: Life Inside (Table of Contents: 1)

The Squad's shore leave is seen in the next story in this issue.

The disembodied electrical female shown with the Annihilation Brigade is Gulag's spirit self, as shown in issues #24 and #25.

Life Outside (Table of Contents: 2)