This issue is a variant of Immortal Hulk (Marvel, 2018 series) #33. There exist further variants.

Art inspired from The Incredible Hulk #1 (May 1962). Letters pasted or traced from the original lettering by Art Simek. 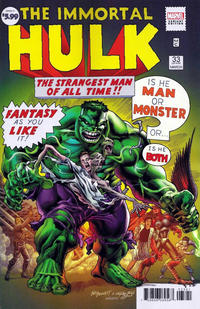 from "The Essence of Christianity"

The Thoughtful Man (Table of Contents: 2)

Letters from Scott Tatom, Oliver Villar, Gary Wolz ("I have been a fan of horror comics from pre-code to present. I absolutely love the horror tome of this comic, which is perfect for the Hulk as he has always been scary."), Allie Tarantino ("terrifying," "horror"), Hunter Garrett ("Will the Immortal Hulk ever trade blows with some of Marvel's other horror characters, such as Dracula or Jack Russell/Werewolf by Night?"), Gavin Lowe, Jason, Joseph Briffa ("There have been plenty of horrific and disgusting moments").
Small preview of next issue's cover.