The Flash in Cartoon Land! (Table of Contents) 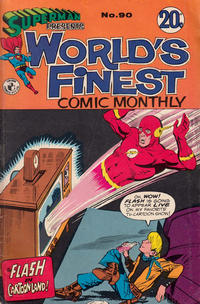 The Flash in Cartoon-Land! (Table of Contents: 1)

This page is an introduction to the following story. In the original US printing, it was accidentally printed after the story.

Battle of the Mermen (Table of Contents: 3)

This printing of the story includes changes to the splash page to replace the original introduction and includes of a job number, and is sourced from Wonder Woman (DC, 1942 series) #199 (March-April 1972).

The Enchantress of Terror Castle (Table of Contents: 4)

This is a reprint of the first appearance and origin of the Enchantress. This printing includes a small expansion of the first page, a job number and changes to the final text box, and is sourced from the reprint in Adventure Comics (DC, 1938 series) #417 (March 1972). The Australian version deletes "of Adventure Comics" in the final panel, so it only reads "returns in a future issue".

Job Number
J-1399
Genre
superhero
Synopsis
Animal-Man must stop a gang of thieves with only the powers of baby animals or a rabbit.
Reprints

This feature reprints the fourth appearance of Animal Man. This printing includes a job number, omits page 3 of the original story (recapping Animal Man's origin) and omits the top 2/3 of page 11, indicating it is sourced from the reprint in Adventure Comics (DC, 1938 series) #420 (June 1972).