Curse of the Dragon's Eye! (Table of Contents) 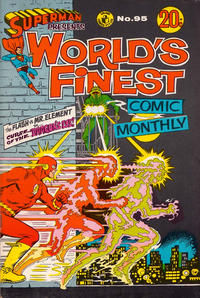 Curse of the Dragon's Eye (Table of Contents: 1)

Prologue: The Hawk and the Dove! (Table of Contents: 3)

The Hawk and the Dove / comic story / 2 pages (report information)

Genre
superhero
Synopsis
At Elmond University, in a small college town, pro-war and peace demonstrators face off. Caught squarely in the middle are Don and Hank Hall, brothers, a "dove" and a "hawk". They argue about compromise, force, and rights as a riot breaks out and police rush in. Meanwhile, across town at the courthouse...
Reprints

The Hawk and the Dove / comic story / 4.7 pages (report information)

Genre
superhero
Synopsis
In a small college town in Elmond County... In court, Judge Hall sentences Mr. Dargo, a racketeer, to jail. He vows "my boys" will get revenge. In chambers, Don and Hank argue about compromise vs. violence, but Judge Hall states they're both wrong (to be single-minded). A bomb bounces in and they dive. Judge Hall is hurt and hospitalized. The boys head back to school, but Hank sees, "That man..."
Reprints

The Hawk and the Dove / comic story / 8.6 pages (report information)

Genre
superhero
Synopsis
Hank spots "The man who threw the bomb!" The boys follow into an abandoned building, but are trapped. Mobsters plan to assassinate Judge Hall. Don wishes for super-strength, or power... A "strange, disembodied" voice offers the bickering boys power. Hank gets an angry red-white hawk costume. Don gets a baby-blue dove outfit, and doesn't want it! "Whenever injustice strikes" they need only call the names "Hawk" and "Dove", but the powers will fade when not needed. Smashing free, they run, swim, and climb the hospital walls to save their dad.
Reprints

The chapter titles are mixed Arabic and Roman, Chapter 1, then Chapters II and III.

The Hawk and the Dove / comic story / 7.6 pages (report information)

Genre
superhero
Synopsis
Costumed, Hawk and Dove burst in on mobsters come to kill Judge Hall in the hospital. Hawk breaks heads, kicks, and tosses felons. Dove tries lectures and reason - and ducking - and pitches out a window to snag a flagpole. Dove returns just in time to deflect "Boss's" gun from killing Judge Hall. Judge Hall is grateful, but wants their names. "Just Call us The Hawk and the Dove!" Their costumes melt away. The judge tells reporters he cannot condone the heroes' actions, and they should turn themselves in! The boys exit, bickering.
Reprints

A 2/3 page promo for The Hawk and the Dove new magazine included at the end of the original printing has been reduced to the first quarter in this Australian reprint. This removes all the material promoting the new series and looks like a closing panel.

The 7 Sins of Simon Stagg (Table of Contents: 7)

Job Number
B-1319A
Genre
superhero
Synopsis
Simon Stagg's old college roommate, Ulysses Bronson invites Simon Stagg and company to see his creation, Morality Mountain, which includes statues of three of the seven deadly sins. It will cost $1 million to finish the others and Stagg hands over a check. The group are later invited to the opening of Morality Mountain. Only Ulysses is there and he insists on showing Simon alone the exhibits. The statue of Pride has Simon's face and Ulysses plans to kill Simon. Meanwhile, Metamorpho strains to keep Sapphire and Java from a chemical soup that has filled the waiting room.
Reprints

This is a reprint of the first Metamorpho story after the series was cancelled at Metamorpho #17 (March-April 1968). Stories then continued as a backup in Action Comics. The text at the end of this Australian reprint is changed to read "in the very next issue of 'World's Finest' Comics!"

Information on the perceived size of the moon, mosquitoes, comets' discovery, and season temperatures.