..When Umar Walks the Earth! (Table of Contents) 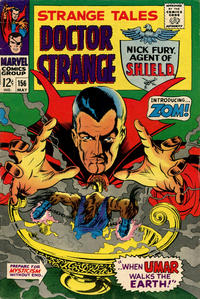 The Tribunal! (Table of Contents: 1)

Part 7 of 9. See various issues of SGT. FURY AND HIS HOWLING COMMANDOS for earlier appearances of Baron Strucker. 24 years had elapsed between Fury & Strucker's last meeting and this one. Shortly after this comic's publication, the 007 film YOU ONLY LIVE TWICE would reveal the identity of S.P.E.C.T.R.E.'s "Number One", Ernst Stavros Blofeld; Donald Pleasence's onscreen appearance, bald with an odd, monocle-shaped scar, is similar to Strucker's.

In the introduction to Marvel Masterworks: Nick Fury Agent of Shield Volume 2 Steranko says he took over the color chores with Strange Tales # 165.

A Profound Potpourri of Perplexing Pronouncements and Preposterous Philosophy, All Portending Practically Nothing! (Table of Contents: 2) (Expand) /

Genre
superhero; fantasy-supernatural
Characters
Umar; Dr. Strange; The Ancient One; Wong; Zom
Synopsis
The Ancient One sends Strange to the Amphora, a large vase guarded by fiery demons in order to free Zom, a being imprisoned by Eternity. Umar comes to earth, destroys Strange's house and summons The Ancient One. Strange unleashes Zom who he persuades to follow him to Earth. The Ancient One lures Umar to Stonehenge where he defeated Dormammu in the past. Strange surprises Umar who flees back to The Dark Dimension, where Zom cannot find her! Zom had been bound by chains of living bondage by Dormammu and seeks vengeance, but with Umar gone he turns his anger against Strange & his mentor.
Reprints

First Line of Dialogue or Text
Dear Stan, In the past few issues...
Reprints