Zha-Vam the Invincible! (Table of Contents) 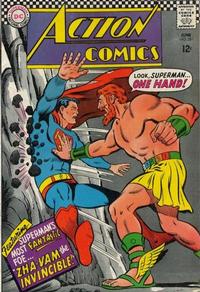 Zha-Vam the Invincible! (Table of Contents: 1)

Genre
superhero
Characters
Superman [also appears as Clark Kent]; Zha-Vam; the United Crime Syndicate; Perry White; Jimmy Olsen
Synopsis
Zha-Vam, who has the powers of several Greek and Roman gods and heroes, joins forces with a major crime syndicate and shows them that he can take on Superman.
Reprints
Keywords
Fort Knox

The Battle That Rocks the Universe! (Table of Contents: 2) (Expand) /

The Flash and the Spectre / promo (ad from the publisher) / 0.5 page (report information)

Genre
superhero
Characters
Supergirl [also appears as Linda Danvers]; Jimmy Olsen. Lois Lane; Superman; Lucy Lane; Perry White
Synopsis
Jimmy Olsen meets Linda Danvers and gives her a piece of Red Kryptonite, which wipes out her super-powers and her memory of being Supergirl. After they marry, she regains her powers but keeps them a secret from Jimmy.
Reprints
Keywords
Imaginary Story; Red Kryptonite

Mystery of the Million-Dollar Briefcase! (Table of Contents: 8)

Genre
advocacy
Synopsis
Dick wonders why Ed knows so much about everything, and Ed explains it's because he visits the library regularly.