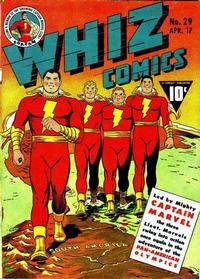 At the Pan-American Olympics (Table of Contents: 2)

The Taming of Buffalo Bull (Table of Contents: 3)

The Stolen Lighthouse (Table of Contents: 4)

The White Lord of Boru Bu (Table of Contents: 6)

contents page title
Anderson is credited on this feature by Jerry Bails' Who's Who, and can be spotted by the faces with high arched upper and almost flat lower eyelids, long thin eyebrows, and small lines under outer corner of eyes. Mouth has often two lines that don't meet in the middle.

The Song of the Slaves (Table of Contents: 7)

Genre
jungle
Characters
Nero; Anita; Doctor Voodoo [Hal Carey]; Emir Abdullah
Synopsis
Hal is joined by Nero and Anita as he leaves Castle Duma. They are set upon by slavers who take them to auction where they are purchased by Emir Abdullah. Hal and Nero lead a slave rebellion. Abdullah escapes with Anita and the Flask.
Keywords
slave auctions; slavers; slaves; the Golden Flask

Famous Blitzkriegs of the Past / text article / 1 page (report information)

Ruthven the Warlock (Table of Contents: 9)