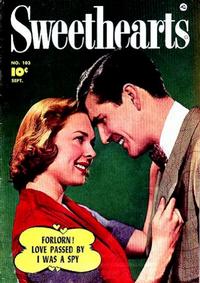 Genre
romance
Characters
Madge Collins; Dennis; Paul Lavelle
Synopsis
Madge leaves Delville for Washington, DC. Her boyfriend Dennis nags her to come home but she refuses and gets a job in the State Department. She meets Paul Lavelle and he says he's writing a book about the State Department and invites her to become his collaborator. She accepts and slips department files to him. The FBI is onto her and she confesses to removing the files and learns Paul is a dangerous international spy. She helps to trap him and he's killed while trying to escape. Disillusioned Madge returns to Delville, and, though Dennis meets her, her relationship with him is uncertain.
Keywords
spy

Love Passed By (Table of Contents: 3)

Genre
romance
Characters
Josie; Michael; Clark
Synopsis
Josie, Michael, and Clark manage a successful lumber mill. Josie is in love with irresponsible, carefree Clark while steady and hardworking Michael loves Josie. When Clark sells his share of the business to Michael for ready money to finance his fun-loving ways, Josie is convinced Michael connived to get Clark out of her life. She plots revenge and eventually forces Michael out of the business. Clark returns to the mill with Josie's blessing but descends into drink. He dies in a fire at home. Josie and Michael are brought together following his death and Josie apologizes for the damage she has done. The two look forward to an uncertain future together.

The Letter (Table of Contents: 4)

Genre
romance
Characters
Eloise; Walter
Synopsis
Eloise is on the fast track at work while her fiance Walter plods along as a lowly shipping clerk. She decides she shouldn't be socializing with someone doing as poorly in the workplace as Walter and schedules a "last date". She has a wonderful time and realizes she will never find another man who thrills her the way Walter does. She changes her mind about ending the relationship and writes a letter of resignation to her employer instead.

Genre
romance
Characters
Dagny Fleming; Dr. Jeff Faren; Mrs. Whitcomb
Synopsis
Dagny cherishes her privacy and buys a small isolated farm where she can have as much privacy as she wants. She believes her neighbors are nosy gossips and avoids them, but falls in love with handsome, young local doctor Jeff Faren. He is annoyed with her coldness to the people of the community and eventually drops her. One winter night, Dagny breaks her leg tumbling down a staircase at home and remains unconscious on the floor for days. She wakes to find herself in her own bed surrounded by neighbors who have braved a blizzard to rescue her. She is deeply touched by their goodness and regrets her selfish, inconsiderate ways. Jeff arrives to set her leg and applauds her change of heart. They embrace.

In the splash panel, although the caption correctly refers to Jeff, Dagny's dialogue balloon calls him "Jim."