Fire in the Sky (Table of Contents) 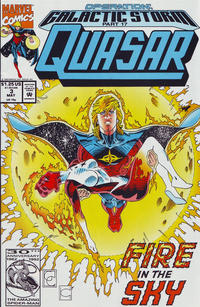 The Scorched Sun (Table of Contents: 1)

First Line of Dialogue or Text
What--?!?
Genre
science fiction; superhero
Characters
Quasar [Wendell Vaughn]; Her; Super-Skrull; Kayla Ballantine; Angler; Devon Ballantine; Epoch; Binary; Dr. Keith Kincaid; Edwin Jarvis
Synopsis
Quasar allows the Nega-Bomb to pass through the stargate as Earth's sun is eaten away by antimatter from the bomb. Wendell tries shunting it into the Quantum Zone, but Binary is the one who ultimately saves the sun, nearly dying from the strain.
Reprints