According to Goldberg's memoir in Robin Snyder's The Comics, Vol 14, no 1, January 2003, Modeling with Millie #8 was the last issue he worked on but there is no such issue so he probably meant Mad About Millie #8. His website says he left Marvel in 1968, but since he is credited with interior stories all the way to Mad About Millie #16 (November 1970), perhaps he was incorrect about both the issue and the date. The fact that his first definite DC work is in Date with Debbi #13 (January-February 1971) seems to back this up. It should be noted that starting in issue #10 the stories have job numbers (#1-9 stories do not), the art does not look to be the same artist as in #1-9 (minor characters do not look like Goldberg's style and the backgrounds are essentially blank spaces), and even the "Stan G." signature looks a little different. 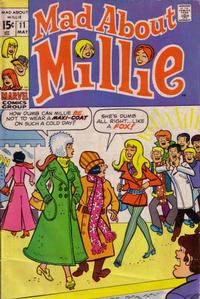 First use of "Mad About Millie" as the feature for the stories.

Swinging Styles for Millie, Chili and Toni (Table of Contents: 2)

When a Chick Feels Sick! (Table of Contents: 4)

In the Thistle Sits a Missile! (Table of Contents: 7)

When Millie Was a Teenager! / comic story / 4 pages (report information)

Appearance in the last panel of space aliens; very unusual for a Millie story.

Chili Gets the Chill! (Table of Contents: 9)