The Revenge of the Rattler! (Table of Contents) 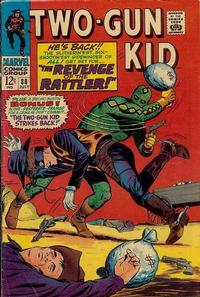 Revenge of the Rattler! (Table of Contents: 1)

Kuramoto credit per Nick Caputo, April 2013. Previous indexer credited Ray Holloway. Nick notes that based upon an examination of the lettering styles Ray Holloway has been incorrectly identified as using the pseudonym "Sherigail". The name was derived from Morrie Kuramoto's wife and daughter, Gail and Sherry, as noted here:

The Two-Gun Kid Strikes Back (Table of Contents: 2)

The Making of the Man! (Table of Contents: 3)