On-sale date from Amazing Heroes #99.
This issue has variants: 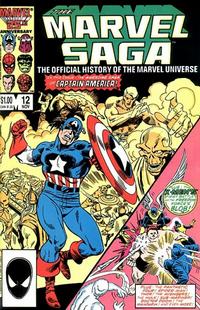 Marvel Saga's Letter Column Without A Name (Table of Contents: 1)

Cover reprints of The Avengers #4, Journey Into Mystery #100 and Tales of Suspense #50 on the inside back cover.