It was also available via mail order with the other three issues from Kidz Water. 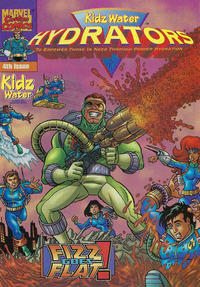 First Line of Dialogue or Text
Hold it right there, mister!
Genre
superhero
Characters
Hydrators [Hydro; Crystal; Ice; Misty; X-Stream; Vapor]; Fizz
Synopsis
Fizz replaces the water in the city reservoir with soda, but the Hydrators stop him and restore the water.