Colossal! The Tiny Titan Turns into the World's Tallest Super-Hero! (Table of Contents) 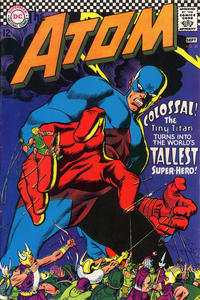 The Up and Down Dooms of the Atom (Table of Contents: 1)

Genre
superhero
Characters
The Atom [Ray Palmer]; Jean Loring; Palonds; Honds (villains)
Synopsis
When Ray Palmer is paralyzed in a scientific accident, he shrinks to a sub-atomic world where he halts a dispute between two warring tribes and discovers a cure for his own condition.
Reprints

Ride the High Seas With Boaterific (Table of Contents: 3) (Expand) /

Letters of comment from readers Steven Schumer, Frank Klein and Guy H. Lillian III, with replies from Schwartz.
In between pages 12 and 13 of sequence 1.

The Shouts Heard 'Round the World (Table of Contents: 5) (Expand) /