Information for this index from Frank Motler via the Yahoo Timely-Atlas-Comics list (3 January 2008).

The Man in the Morgue! (Table of Contents) 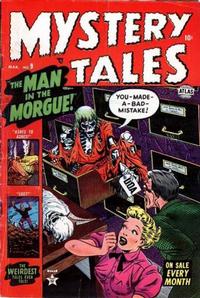 The Specimen! (Table of Contents: 1)

Job Number
B-995
Genre
horror-suspense
Synopsis
A scientist plots to use a mermaid from Atlantis to gain world renown and so he lies to her that he loves her until he can build an escape-proof tank. Unfortunately for him, she has the exact same intentions for him and drags him down to Atlantis so they can use him as a specimen to model how human males appear in order to create an invasion force.
Reprints

Job Number
B-739
Genre
crime; horror-suspense
Synopsis
A butcher poisons his ex-partner's meat locker in order to drive him out of business but then comes back later to make sure he did not leave any evidence behind and gets himself locked in. Over the course of several days he waits for someone to come and let him out, but no one comes. He resists the temptation to eat the meat and eventually starves. When his body is found the owner wonders why he did not eat the meat since the inspector had declared it unfit and made him replace the entire locker with fresh stock.
Reprints

Ashes to Ashes! (Table of Contents: 3)

Job Number
B-779
Genre
crime; horror-suspense
Synopsis
A woman burns her uncle to death before learning that the directions to his fortune are tattooed in a map upon his back.
Reprints

The Broken Step (Table of Contents: 4)

The Man in the Morgue (Table of Contents: 6)

Job Number
B-826
Genre
crime; horror-suspense
Synopsis
A hoodlum spends his last buck for a psychic reading and is told that his luck will change. After spending the night in an alley with nothing to eat an elderly man approaches him and he strangles him in order to rob him. The cops give chase and gun him down. The police wonder why the elderly man was in such a run down area and look through his papers to discover he was a lawyer looking for the hoodlum who killed him in order to inform him that he had just come into a large inheritance.
Reprints

Job Number
B-749
Genre
crime; horror-suspense
Synopsis
Criminals hide loot in a cave and one is arrested and serves a jail sentence of twenty years. When he is released he goes back to the cave and shoots the man and woman who were lost in there for twenty years, but their son kills him.
Reprints