Index revised with information from atlastales.com.

The 13th Floor! (Table of Contents) 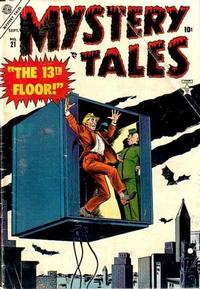 Job Number
E-688
Genre
horror-suspense
Synopsis
Hugh Carter has a weak heart but his wife is also sickly and he works hard in order to send her to a better climate. In his office building the elevator takes him to the 13th floor where he encounters a figure who says he is Death. Hugh protests that he must return to earth and care for his wife. Death explains that he was brought here for a special reason but agrees to send him back if he accepts living another 30 years. Riding the elevator down he sees his wife riding up to the 13th floor and realizes she was destined to die this evening and Death was trying to keep them together.
Reprints

Splash page is drawn by Harry Anderson and also used as the cover.

To Live Forever (Table of Contents: 2)

Job Number
E-653
Genre
crime; horror-suspense
Synopsis
A woman murders her husband for his money but when she reads his will, she notices he forgot to sign it. She pays a medium to summon his spirit to get him to sign it, but she finds herself transported into her husband's coffin with the dead man, not the other way around.
Reprints

Nothing! (Table of Contents: 4)

It Walks Erect! (Table of Contents: 6)

Job Number
E-699
Genre
horror-suspense
Characters
Dr. Arthur Nagan
Synopsis
A doctor who transplants ape organs into men to make them healthy is captured by apes who remove his head and place it on a gorilla's body.
Reprints

Dr. Nagan later appears as one of the Headmen (first in The Defenders (Marvel, 1972 series) #21), villains created by Steve Gerber.