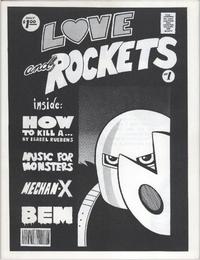 First Line of Dialogue or Text
Welcome, Ladies and Gentlemen, to the first issue of "Love and Rockets"

The initial "prototype" version of Love and Rockets had the saga of BEM split into two parts, which Gilbert expanded into five when Fantagraphics commissioned Los Bros Hernandez for a regular series.
This was the absolute first published debut of Luba. Her appearance here is much different from her depictions in later issues; thus, fandom and Gilbert generally agree that this is not the same character and her introduction here can't fit into the Palomar/Luba in America continuity.

The title of this story implies that it is somehow written "By Izzy Ruebens". Izzy is another character in the Locas/Hoppers mythos, so it is unclear how she can be seen to write a story, as she isn't seen breaking any fourth wall at any point in this or future stories. She is also featured in another story later on in this same issue. This is one of the strange continuity problems that crop up in both Jaime and Gilbert's early stories, and is largely left unexplained.

Story is entirely in German.

How To Kill A (By Isabel Ruebens) (Table of Contents: 5)

Music for Monsters (Table of Contents: 6)

The title for this story is not listed anywhere in the story itself in this "prototype" version, but it can be deduced from the cover, using the process of elimination. In the full 68-page version, it is clearly denoted as the title of this sequence.

This page is comprised entirely of parodies of the ads have been historically found in comic books since their inception. Readers are offered impossible wonders such as a "real live dinosaur", "exploding underwear", "robot slave kit", "mini-hand blaster", "changeling pills", "man-eating toilet", "death glasses", a "real LIVE person trapped in crystal ball", a book that will enable those who order it to "rule the world", and many more satiric takes on the traditional mail-in offers advertised in comics for decades, complete with an obviously fake address to send payment to in "Berlin, Russia" with two zip codes -- one is a standard 5-digit US format postal code, and one is longer, but crossed out.