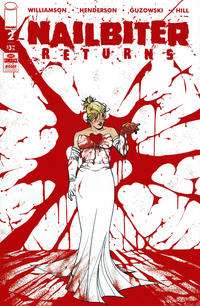 Inside front cover featuring the story so far synopsis, black & white one-third page sketch of the Nailbiter holding his hands up, creator credits plus the publisher & indicia information.

Chapter One (Table of Contents: 2)

Preview of Nailbiter issue #3's cover artwork minus dressing with Next Issue text and on-sale-date.

Back Cover (Table of Contents: 4)