This issue has four separate printings. All printings subsequent to the first one list "Fall 1982" rather than "September 1982" in the indicia, which is another way to verify that an issue isn't a first print, for those who aren't sure what the various cover prices for the various printings were.

On-sale date, month only, from Amazing Heroes #13, with note "[July-delayed from May]". 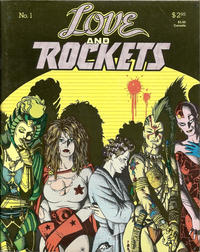 O, what a wonderful book it is! (Table of Contents: 1)

Synopsis
Half-page introduction by Groth. Publishing credits and table of contents, plus indicia make up the remainder of it.
Reprints

This chapter of the story "BEM" is immediately followed by Jaime's story "Mechan-X". It starts on page 3 and ends on page 10. The second chapter resumes on page 19.

Luba's appearance in this story is largely considered out-of-continuity with her later appearances.

This chapter of the story "BEM" is immediately followed by Jaime's vignettes "Barrio Huerta" and "Penny Century, You're Fired!". The third chapter resumes on page 29.

This chapter of the story "BEM" is immediately followed by Jaime's story "How To Kill A...". Then another one of Gilbert's stories, "Music for Monsters" begins, before resuming BEM with the fourth chapter, on page 47.

This chapter of the story "BEM" is immediately followed by Jaime's story "Locas Tambien". The fifth and final chapter of BEM is picked up on page 59.

This chapter concludes the saga of BEM.