Their Relationship Shattered...Is the Dark Knight Prepared for War? (Table of Contents) 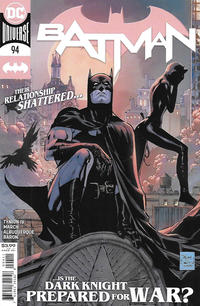 You Brought Me the Ocean (Table of Contents: 4) (Expand) /

Two-page public service announcement from DC Comics sparked by the COVID-19 outbreak of 2020 featuring an illustration of Cyborg (standing on the left) while Hal Jordan (standing on the right) projects a large "6 ft" symbol with his power ring to help them maintain their social distance from each other. Do we really believe Vic's high-powered computer brain can't calculate proper distancing without Hal's GL ring assistance?