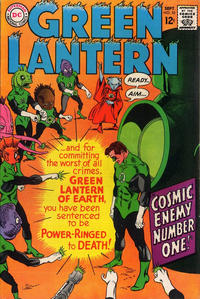 Story continues in the following issue. Mentions deceased Green Lanterns Davos of Pharma and Chogar of Tyraea among at least 13 Green Lanterns who died at the beginning of this story. Al Magone is drawn as a caricature of actor Edward G. Robinson.

Get Set for an Electrifying Experience! (Table of Contents: 6) (Expand) /

How to Do Strong Man Tricks...Without Strength! (Table of Contents: 9) (Expand) /

Job Number
6515
First Line of Dialogue or Text
I see you're trying to put roll bars...
Synopsis
A boy explains to another how to make model joints look welded on, using heat.

Hint submitted by Ronald Andrews of Richmond, Vermont.
At bottom of page 15 of story.