Wraparound cover; faux blurbs on back margin, á la Miller's "Ronin"
The art includes a miniature inset of Parsonavich's art from the "Hams-Tour '86" T-Shirt advertised in the previous issue. It appears here as a poster. 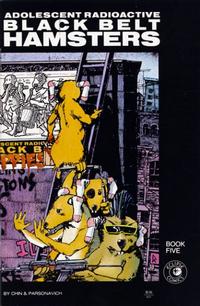 This editorial lists all scheduled editorial assignments at Eclipse for 1987, noting that Letitia Glozer (Yronwode's sister) will be editing ARBBH.
This page also includes "On The Racks", a checklist of Eclipse publications that month.
Inside front cover

[Inside this van are six crazed individuals...] (Table of Contents: 2)

Genre
satire-parody
Characters
Adolescent Radioactive Black Belt Hamsters [Bruce; Chuck; Clint; Jackie]; The Pot-Luck Organization [Big Eddie Baxter; Billy B. Bibbit; Jacques D'Baux; Bobby Gorr; Mongo; Sister Mary Blister]; Warden Bullhead Baxter; The Heap (cameo); Master Lock; Parsonavich (cameo); Randi
Synopsis
While on the lam for destroying the Statue of Liberty, Clint finds Randi, a woman he had met at a concert. She convinces the boys to evade capture by removing their clothes and putting socks on their ears. The police then believe they are her dogs. The Pot-Luck Organization catches up to them at a Disney-style theme park.
Continued next issue.

Clint remembers meeting Randi at a Dead Kennedy's concert in New York during the song "Goons Of Hazard". The song is from their 1985 album "Frankenchrist" and by the time this comic was released their live performance schedule was being derailed by frivolous prosecution tied to that album. Their last live shows were played in early 1986 (followed by a studio album and compilation), so the conversation restricts the event to a period of a few months in late 1985/early 1986.

Chin states that artist Parsonavich's real first name is Patrick, although it is frequently listed elsewhere as Chris (as at the Who's Who of American Comics site, last updated in 2006). Wikipedia currently identifies him as Patrick Parsons working with Chris Walker, but does not cite any source for this information. Chin himself said in an editorial in issue #2, "Parsonavich's first name isn't 'Chris', as has been indicated in Eclipse Comics flyers and in the press. It's simply Parsonavich... one word, four syllables." In the context of the tone of this series it could be presumed that this is self-mythologizing (in line with drawing themselves into the story). It could also be that all of his credits are collective pseudonyms for Parsons and Walker as a team (as in Gemini= Jim Starlin + Al Milgrom).