The Archies Introduce a New and Exciting Sound in... "One More Time" (Table of Contents)

No credits, but art identifiable as Goldberg by his style. 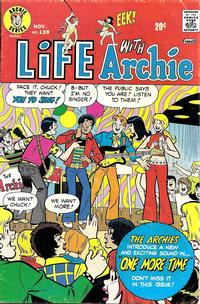 One More Time (Table of Contents: 1)

This story suggests that Chuck will become a member of the Archies, but the idea was abandoned in subsequent stories.

The art is one of the clearest examples of the new style that Dan DeCarlo was bringing to his work at this time. This includes more expressive use of light and shadows, and a greater attempt to give a feeling of depth in the drawing. He soon went back to a more cartoony style.

It Makes a Lot of Cents (Table of Contents: 3)

Script identifiable as Frank Doyle by his distinctive style, which includes tongue-in-cheek captions that address the reader directly, and fourth-wall-breaking (Veronica: "According to that last panel, they went exploring!").

Art identifiable as Bob Bolling by his distinctive drawing style.